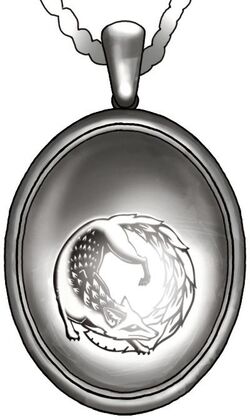 A locket engraved with the "Hinterland" logo containing a photo. You have ability to upload a personal family photo in the game, which will replace the "default" photo.

Will Mackenzie has in his inventory and can refer to in times of need. When he looks at it, he is reminded of what he's fighting for, what he has to live for. This is manifested in the game by restoring a portion of his willpower.

But, with each use, the photograph fades a bit more, as though the memories that fuel it become less specific, less real.

The locket has the same effect as the Polaroid Photo. The locket is only available to certain backers of The Long Dark during the Kickstarter Campaign.